Until this day, no remains of the imperial palace in Memleben have been found although there are many theories on its exact location, none of which has yet been conclusively proven. However, it must have been a structure that was able to house and feed a larger number of people (the ruler and his train).
It is likely that the palace and the Benedictine monastery founded by Otto II have coexisted from 979 at the latest. There is proof that, between 936 and 994, several Ottonian rulers had stayed in Memleben. A royal residence in Memleben was supposedly reported even in later Salic times, which is thought to be proven by a deed by Conrad IIin the year 1033. 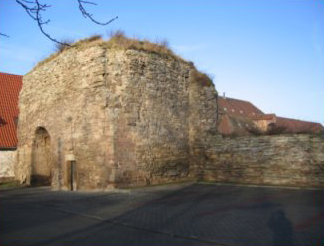 The so called "Kaisertor" (Emperor’s Gate) has for many years been regarded as the Ottonian palace’s entrance gate. It has by now become known that it is in fact the southern entrance to the transept of the 10th century monumental church.